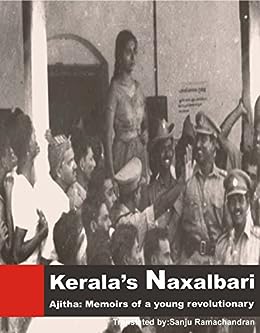 ‘What is a Naxalite pa?’ ‘They are people who don’t like rich people. They cut off the heads of rich men at night and leave them on their doorsteps the next morning’
What on earth were my parents thinking when they explained Naxalism to child this way?!

I was grounded enough to know that we were not rich, but I still remember being terrified for my neighbour uncle, whom I considered to be a richman,and having nightmares of his beheaded head on his doorstep. This was in the early 80s and Naxalism and Ajitha were still part of newspaper articles that my dad used to read out loud from the Malayala Manorama. This is my first memory of the name Ajitha, the Naxalite. It was several years later, I heard her name again when we were trying to get help for a friend in an abusive marriage and she was asked to contact Anweshi. Anweshi? Yeah, run by ex-Naxalite Ajitha, they said. Ah.

I’m not that child anymore. And I know who Naxalites really are.

The problem with reading on the Kindle is that you don’t give too much importance to the book covers. So when the incident related to the photograph on the book’s cover happens, it punched me in the gut like nothing else. It unleashed a wave of anger in me, and I realized that it is such anger that creates people like her. I hope she has never, ever forgiven the police and the system for this.

The book is a translation and as most translations go, it drones on and on, painfully. But if you look beyond the language and the style of narration, you will read about a fiery young girl who became the face of the Naxal movement in Kerala. The way she continues to loom large as ‘Naxalite Ajitha’ one would think that she participated in several attacks and was some kind of fearsome terrorist. But no, she was just an idealistic young girl who went on one, just one, mission. A mission that failed. Not yet an adult, she went as the only woman in a group of men, with the blessings of her parents.  Admirable. Though in her later interviews she does talk about the sexual harassment she faced within the group while in the forests. I still don’t understand the splits, the ideology of each faction, the internal politics, the Soviet-China divide or anything. The book mentions a lot of ‘betrayals’, but I have no clue what they are.

Reading this book in 2017, after several trips to ‘communist’ China, I am not able to relate to how Mao inspired and kicked off such a violent revolution in India in the 60s. Or how books of translated Mao quotes sold like hot cakes. The only Mao quote that I am familiar with are the ones from the souvenirs about him being a ‘Very Gelievable’. Or how they sought validation from Peking. While I am on their side to a large extent, I am extremely uncomfortable about the fact that they chose a foreign country and the leader of a foreign country over their own.

Makes me sad that some of those heroes (yeah) from the movement have changed, changed to the extent of having a godman’s picture on his table